Grease Traps and the FOG Problem in Your Kitchen

There are two different types of greases found in a typical commercial kitchen: yellow grease and brown grease. The former is often called Recycled Vegetable Oil (RVO) and it is what you get when you recycle used cooking oil recovered from the oil hogs of commercial kitchens such as deep fryers and griddles. Yellow grease (RVO) is incredibly versatile and can be used to produce soap, animal feed, fuel, rubber, detergents and even clothes. Yellow grease is so profitable that thieves can make a killing ripping off restaurants for their “yellow gold.” Yellow “gold” is a $2 billion a year industry which is why much money is spent trying to trap and recover yellow grease. Like yellow grease, brown grease is also a worthy investment, albeit, for a completely different reason, as the rest of this blog will show.

Brown grease (Fats, Oils and Grease–FOG) is tarnished with food solids and is therefore deemed unsuitable for recycling or re-use in most applications. Consequently, brown grease is what restaurants dump down the kitchen sink, which is typically connected to a local wastewater disposal system. Now assume that a small restaurant dumps 70 pounds of brown grease monthly down its drain which is an annual equivalent of ~800 pounds (Environmental Protection Agency (EPA) numbers range from 800 to 17,000 pounds/year). With these numbers in view, ~8,000 restaurants in New York city are dumping ~6.4 million pounds of nasty grease into their city’s wastewater disposal system every single year. This brown grease wreaks havoc on the sewer lines as it congeals and clogs up the lines. None of this is fiction by the way because in its report to congress, the EPA noted that “grease from restaurants, homes, and industrial sources are the most common cause (47%) of reported blockages.” Essentially, the grease in your restaurant poses problems to both public health and water quality as it directly impacts sewer overflows.

Note also that the problem is not just “out there” in the sewer lines that make up the wastewater disposal system. Clogged up sewer lines outside your restaurant cause putrid grease backups into your kitchen, sewer overflows into your parking lot, and illnesses caused by the bacteria, viruses, parasites and fungi that typically make up raw sewage. You would be hard pressed to find a customer willing to eat in, let alone enter your restaurant while the whole place smells of greasy waste.

If you’ve been keeping a tally of all the grease related issues so far in this blog, we’ve got one additional issue for you. One city has instituted a $1,000-per-day fine for FOG violations. Sure, the fine will vary from city to city, but the point holds. If you violate your city's FOG regulations, you'll be required to pay a fine, and it could be a hefty one.

Now these grease related issues are easily mitigated with grease control equipment. Sewage treatment plants, also known as Publicly Owned Treatment Works (POTWs), enforce FOG limits on food service establishments like your restaurant. All you need to do to meet the regulatory demands of your local POTW is to install and maintain a properly sized grease control unit for your restaurant. A proper understanding of how the grease trap functions will aid your selection process. To this end, we will discuss the science behind the functionality of grease traps. 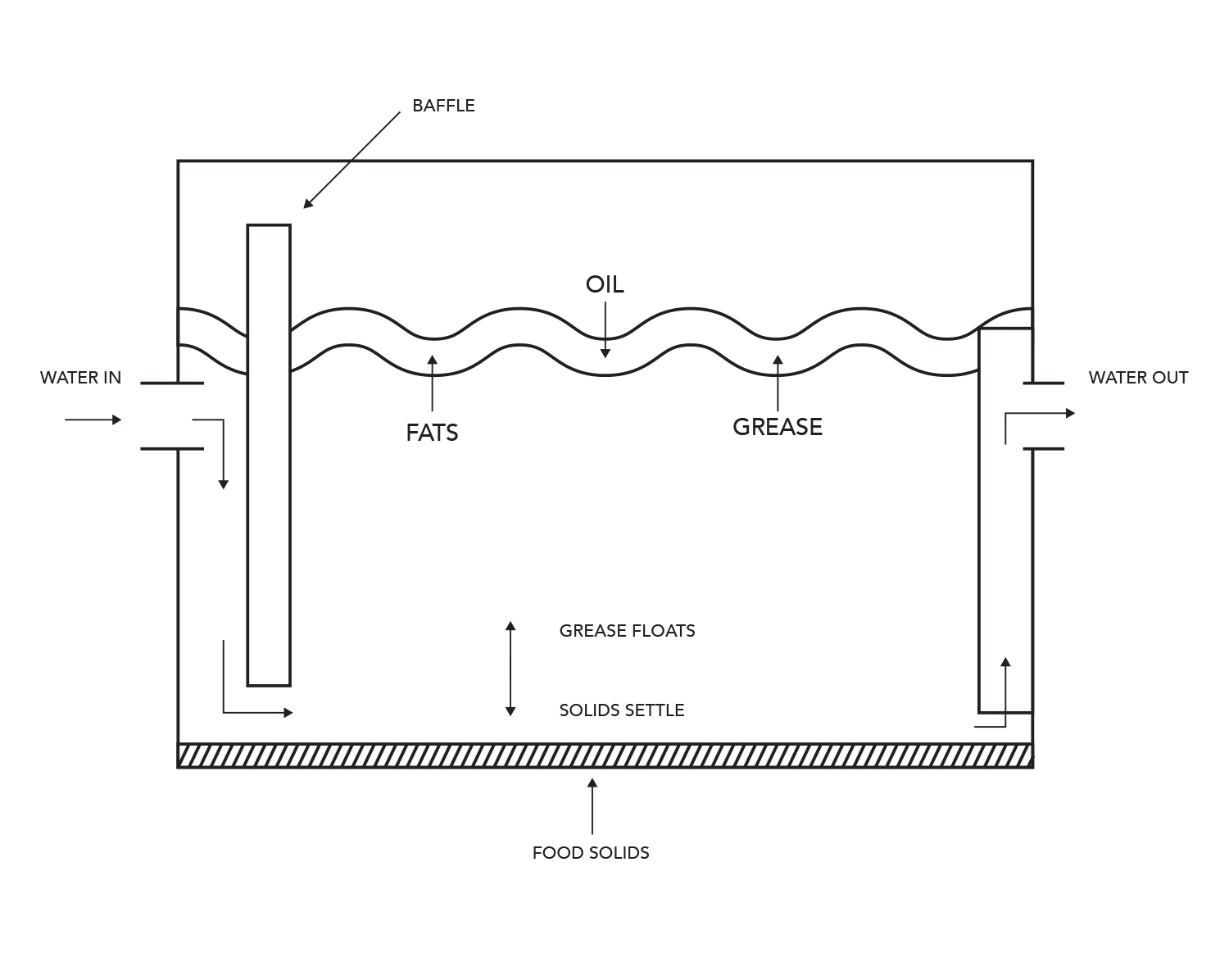 You’ve probably heard the expression, “blood is thicker than water,” a proverb meant to convey the idea that family relationships take priority over all other forms of relationships. The proverb works, in part, because blood is truly thicker than water--since it weighs more (or has a higher specific gravity) than water. Stated “scientifically,” blood has a higher specific gravity than water (nerds always have to make things complicated).

What does this have to do with grease traps? Well, grease traps function based on the same principle connected with specific gravities. Liquids heavier (thicker) than water sink in water, while liquids lighter than water float in water.

When foods containing fats, oils, and greases encounter water in your sink and move into the grease trap, they undergo a process called hydrolysis (Hydro means “water” and lysis is a greek word for “loosen”)--a fancy way to say that water breaks down the food. As water does its “loosening” work on the FOG, the FOG disintegrates into its two compound forms: glycerols and fatty acids. 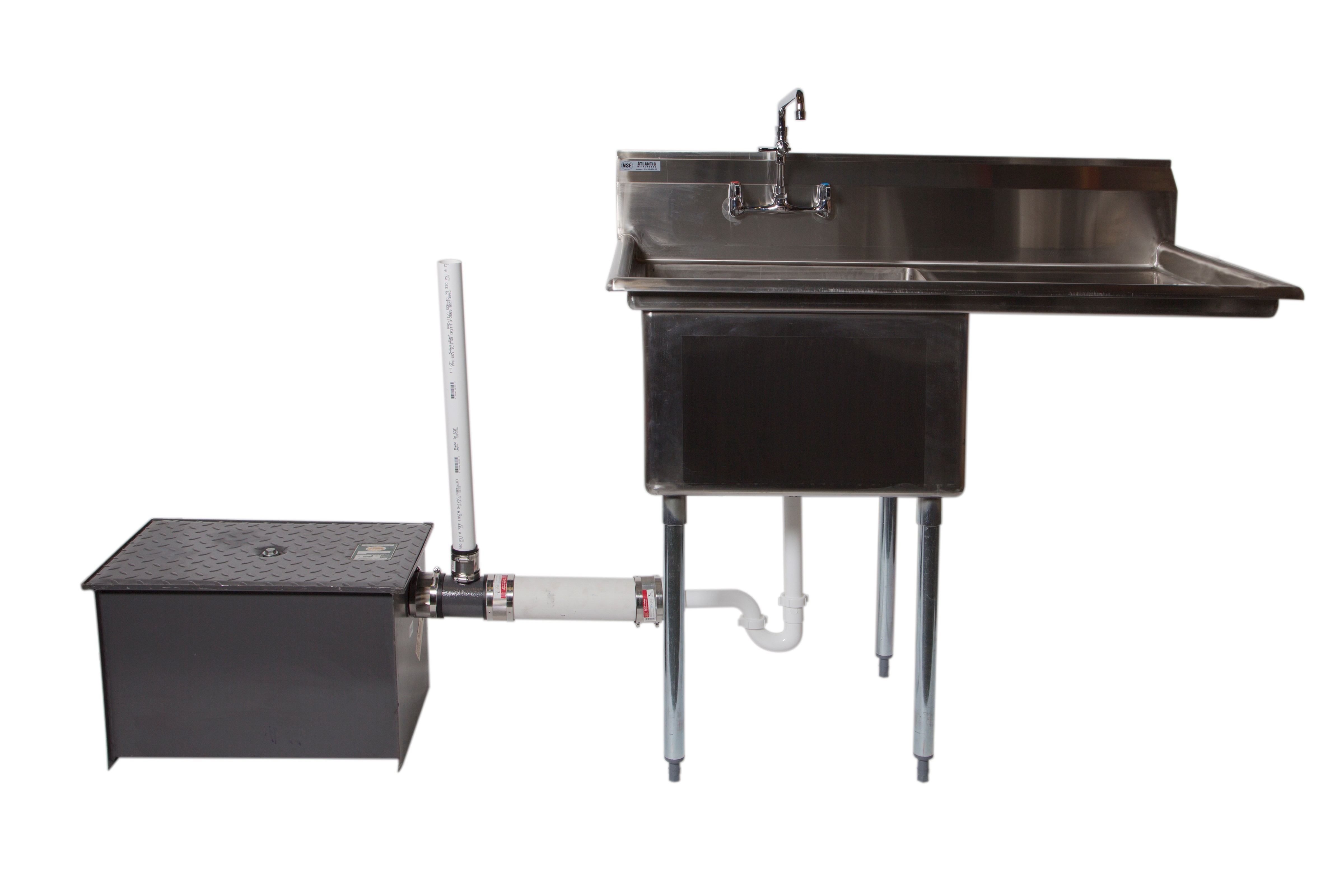 Now, there are three main types of grease control equipment and all three have the same functional design. The first is called a grease recovery device (used typically for yellow grease). The second is a grease interceptor (typically bigger in size and installed underground for brown grease), and the third is called a grease trap (typically smaller and used for under-the-sink units). For the purposes of this blog, our focus will be on the last two types, with greater attention given to grease traps.

Speaking of the “tank,” it is worth mentioning here that the material that makes up your grease control equipment goes a long way in determining its lifecycle. Grease interceptors/traps built with concrete are unreliable because fats, fatty acids, vegetable oils and the like, are harmful to concrete. Uncoated metal will not do either, as an alternative to concrete, because of its susceptibility to rust.

Your grease control device should ideally be made of heavy carbon steel and a corrosion-resistant enamel coating to guard against rust. You will find these attributes in our Atlantic Metalworks grease traps which provide a wide array of grease traps sizes at an affordable cost. See Table 1 below for more details.

Go here for more information on the listed grease traps.

The industry-wide move away from concrete as a suitable material for grease interceptors/traps has led some manufacturers to use thermoplastics, stainless steel and fiberglass, as an alternative to heavy carbon steel traps. Ashland’s polytraps are a light weight and creative solution worth considering. Manufactured with a special compound designed to prevent rust and corrosion, their seamless, leak-proof design can handle even the highest of demands brought on by heavy applications, all the while remaining lightweight and easy to handle. Ashland polytraps can be installed above or underground depending on the needs of the kitchen. See Table 2 below for the various options of polytraps from Ashland.

Go here for more information on the listed grease traps.

As stated earlier, Publicly Owned Treatment Works (POTWs) are “imposing mandatory measures of assorted kinds, including inspections, periodic grease pumping, stiff penalties, and even criminal citations for violators.” The violations here pertain to the illegal disposal of FOGs. If you plan to, or currently have a food service establishment, it should go without saying that you need a grease trap. Once you have decided on the appropriate grease trap or grease traps needed for your kitchen, you will also need to determine the grease trap’s maintenance cycle.

A good rule of thumb for the proper maintenance of any grease trap is the 25 percent rule. This rule accounts for both the accumulation of solids at the bottom of the mixture, as well as any FOGs floating at the top of the mixture. In either case, the accumulation must not exceed 25 percent of the wetted surface of the grease trap. Furthermore, combined waste from both locations (top of the mixture and bottom of the mixture) in the trap must not exceed the 25 percent rule either. Consequently, the trap must be inspected and cleaned frequently to check for the FOG and solids collection levels and to make sure that there is not too much build up.

Be sure to check all local and state regulations before determining the maintenance schedule of your grease trap.

Installing grease traps to collect all of that nasty brown grease and regularly maintaining your grease traps can save you thousands by protecting against costly sewer backups and regulatory fines. A dollar not spent is a dollar in your pocket, making brown grease as profitable as yellow gold.